There’s a rumor in Saint Petersburg o/~     Solaris Euro and International is happy to add ULLI-Pulkovo Airport to their line up.   You can pick up the scenery at the following locations:

For the airport in the United States, see St. Pete–Clearwater International Airport.

Pulkovo Airport (Russian: Аэропорт Пулково, IPA: [ˈpulkəvə]) (IATA: LED, ICAO: ULLI) is an international airport serving St. Petersburg, Russia. It consists of one terminal, Terminal 1 which is located 23 km (14 mi) south of the city centre.[2] The airport serves as a hub for Aeroflot[3] and as focus city for Smartavia. Pulkovo International Airport is responsible for serving the citizens of Saint Petersburg, as well as the Leningrad Oblast: a total of 6,120,000 people.

Pulkovo Airport was officially opened on June 24, 1932, as a state-owned domestic airport. According to provisional figures for 2017, 16,125,520 passengers passed through the airport, a 21.6% increase over 2016. This makes Pulkovo the 4th busiest airport in Russia and the post-Soviet states.[2] Pulkovo is one of the largest airports in Russia and Eastern Europe.

In January 1931, construction of an aerodrome near Leningrad (Saint Petersburg’s official name between 1924 and 1991 and the source of the airfield’s IATA code of “LED” [2]) commenced and was completed on June 24, 1932, with the first aircraft arriving at 17:31 that day, after a two-and-a-half hour flight from Moscow carrying passengers and mail.[4] This aerodrome was at first named Shosseynaya Airport, the name coming from the nearby Shosseynaya railway station.[5] Soon after the airport opened regular flights to Petrozavodsk, Pudozh, Arkhangelsk, and Murmansk.

In 1936, a foundation for a new terminal was laid out. Leningrad’s airport was also provided with new G-2s and PS-84s.[6] In 1941, a new completely commercial passenger route between Moscow and Leningrad was opened; before it was a mixed passenger-mail route. Construction of the new terminal thrived between 1937 and 1941. The architects of the new three-story terminal were Aleksandr Ivanovich Gegello and N.E. Lansere. Construction was abruptly put on hold in July 1941, one month after Nazi Germany‘s invasion of the USSR on June 22, 1941. The airport was the front line in the German Siege of Leningrad. There were no flights between 1941 and 1944. The nearby Pulkovo hills were occupied by the Germans and were used by German long-range artillery for daily bombardments of Leningrad. The airport was cleared of the Germans in January 1944, and resumed cargo and mail flights after the runways were repaired in 1945. In February 1948, after the damage was completely repaired, the airport resumed scheduled passenger flights. In 1949, there were scheduled flights to 15 major cities of the USSR, and 15 more short-range flights within the north-western Russia.[7] In 1949 Shosseynaya Airport recorded a passenger traffic rate of 6,305, 333 tons of mail, and 708 tons of cargo.[8]

In 1951, the construction of the new terminal was complete. In the mid-1950s the new extended runway was completed, allowing to handle larger aircraft such as Ilyushin-18 and Tupolev-104.[9] in that same time period the exploitation of jet engine planes began in Shosseynaya Airport. On March 15, 1959, the USSR-42419 Tu-104 was the first commercial jet airplane to take off from the Shosseynaya Airport.[citation needed]

In the early 1960s modern regional airplanes such as the An-24 and Yak-40 began to appear in the airport. Flights to Vladivostok began to emerge in the flight lists. ICAO category 1 standards were implemented in 1965, making way for international operations. By the late 1960s, over 60 airlines had flights to and from Saint Petersburg’s airport. On February 8, 1971, Shosseynaya was awarded the Order of the October Revolution.[10] The airport was renamed Pulkovo Airport on April 24, 1973. In May 1973, the new Pulkovo 1 terminal was opened. The famous 5-cup Pulkovo 1 was designed by Alexandr Zyk. The 5 cups on top were put intentionally to give the terminal a more spacious feeling, as well as to allow more natural sunlight to pass through. This terminal is regarded as a masterpiece of Soviet postmodern architecture.[11] Pulkovo 1 was a domestic-only terminal. Domestic air traffic increased approximately 45% every decade between the 1970-1990s. The old pre-war building of the airport was renamed to Pulkovo 2 and the terminal was exploited for international flights only.[12]

On April 11, 1986, the new departure and arrival zones for the international terminal were completed, doubling the passenger traffic rate capacity of Pulkovo 1.

In 2007, Grimshaw Architects was announced as the winner of the construction contract. In 2009, The Saint Petersburg Transportation Ministry requested that an operating company for Pulkovo Airport be created, and a consortium known as NCG (Northern Capital Gateway) was set up by Russian VTB Capital Bank, international Fraport AG Company, and the Greek Copelouzos Group. On April 29, 2010, NCG won the tender for a 30-year operating lease over Pulkovo Airport. On November 24, 2010, Russian Prime Minister Vladimir Putin attended a ceremony celebrating the beginning of construction on the new 150,000 m² Terminal 1.

From 2020, the number of destinations are expected to increase rapidly, with up to 75% increase in passenger numbers forecast. This follows a five-year test agreement permitting non-Russian airlines to operate flights from multiple European destinations into the airport under an OpenSkies/Seventh-freedom traffic right[13] The test follows an easing of visa requirements for many European nationals wishing to visit the St Petersburg region designed to increase tourism to the city through the airport.[14]

Pulkovo 2 is approximately 25,000 m2 (270,000 sq ft). The terminal used to serve as the international departures and arrivals zone. It was last renovated in 2009. Today, Pulkovo 2 is used as a second-hand terminal for government officials and VIP members.

This terminal is 43,000 m2 (460,000 sq ft).[15] Pulkovo 1 was built for 6,500,000 passengers annually, but by 2008 it surpassed its maximum capacity.[16] Since its reconstruction was completed in 2014, this terminal is now used for all passenger flights, domestic and international. It has several duty-free shops, restaurants, and 6 jet bridges. It was reported that when the reconstruction of Pulkovo 1 is completed, Pulkovo Airport’s capacity would increase to 17,000,000 passengers annually.

Construction of Terminal 1 was delayed several times and began in 2010.[citation needed] In November 2013, the airport was tested for errors by over 5,200 residents of Saint Petersburg who partook in the process. Several days after the test the new Terminal 1 opened on December 3, 2013. On February 14, 2014, all operations were consolidated into the new terminal as the old Pulkovo 1 and Pulkovo 2 terminals have been shut down.[15] The new terminal contains several business lounges, restaurants, pharmacies. Terminal 1 is 147,000 m² and has 400,000 m² airport dock in front of it. The airport has 88 check-in counters, 110 passport booths, 7 baggage carousels, 110 parking stands, 17 gates, and 17 escalators. The interior of the new airport was designed by Grimshaw Architects and directly correlates with the designs and style of Saint Petersburg city. The new Terminal also sought many artistic sculptures and paintings to give a sense of thriving culture to passengers. Four sculptures from Dmitry Shorin‘s project named I Believe in Angels decorate the departure hall.[17][18]

The current Pulkovo-1 terminal includes new terminal and old Soviet terminal that was re-constructed and fully converted into departure area. 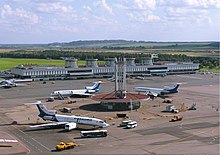 View of the taxiways

The airport’s website lists the companies currently participating alongside NCG:[86]

“Russian VTB Capital, member of state-owned VTB Group, German Fraport AG, which manages and operates the airport of Frankfurt and many other international airports, and Horizon Air Investments S.A. member of the Greek Copelouzos Group”.

Although not yet listed on the website, the latest investor is Qatar Investment Authority (QIA), which now owns a 24.99% share of the Pulkovo Airport.[87]

In mid-2016, Qatari sovereign wealth fund QIA was proud to announce that it had purchased nearly a quarter-percent stake in the Russian airport.[88]

Qatar purchased a roughly 10% stake in Thalita Trading from Germany’s airport operating holding, Fraport (FRAG.DE), in July 2016.[87] Thalita Trading is the parent company of NCG, manager of the airport.[89] It was reported that Fraport expected to make between €30–40 million in the sale.[88]

Commenting on the sale, Qatar’s Doha News reported that:[88]

Sheikh Ahmed Al-Thani, vice chairman of QIA and member of Qatar’s ruling Al-Thani family, is now listed as a member of the Board of Directors on the Pulkovo airport’s website, along with Arturo Carta of QIA.[91]

QIA is the sovereign wealth fund of Qatar founded in 2005 by the Al-Thani family.

Since its inception, the sovereign wealth fund has been ramping up its worldwide real estate purchases, and most recently has invested heavily throughout the United States. The fund purchased stake in the Empire State Building in August 2016 and became the primary investor in one of Washington, D.C.’s larger mixed-use developments, CityCenterDC, which delivered in 2015.[92]

In December 2016, QIA together with commodities trader Glencore purchased a 19.5% share in Russia’s largest oil company, Rosneft, for €10.2 billion ($10.8 billion).[93] Rosneft has been under sanctions by the European Union and United States since 2014.[94][95] A few months following the deal, Reuters reported that when asked if he was still confident about the investment, QIA CEO Sheikh Abdullah Bin Mohammed Al-Thani responded “Absolutely, no doubt”.[93]

In March 2017, CEO Al-Thani announced Qatar’s latest venture: “Soon we will be opening an office in the Silicon Valley in San Francisco“.[96][97]

Qatar’s aggressive investments, including its “interest in foreign airports”, have been met with hesitation from those suspicious about the country’s longstanding connections to multiple terrorist organizations and their senior-level operators.[98][99][100]

For private car travel, Pulkovo Airport is accessible via the nearby Pulkovo Highway (Pulkovskoe shosse) from Saint Petersburg city center.